Have you ever thought about the origin of life?

Endless Ceiling is a personal, practical exploration of chemistry. Its capstone is a new evolutionary theory: astro-isogenesis.

Experience a new spiritual connection to the natural world. Climb the ladder of adventure that leads through the Endless Ceiling. 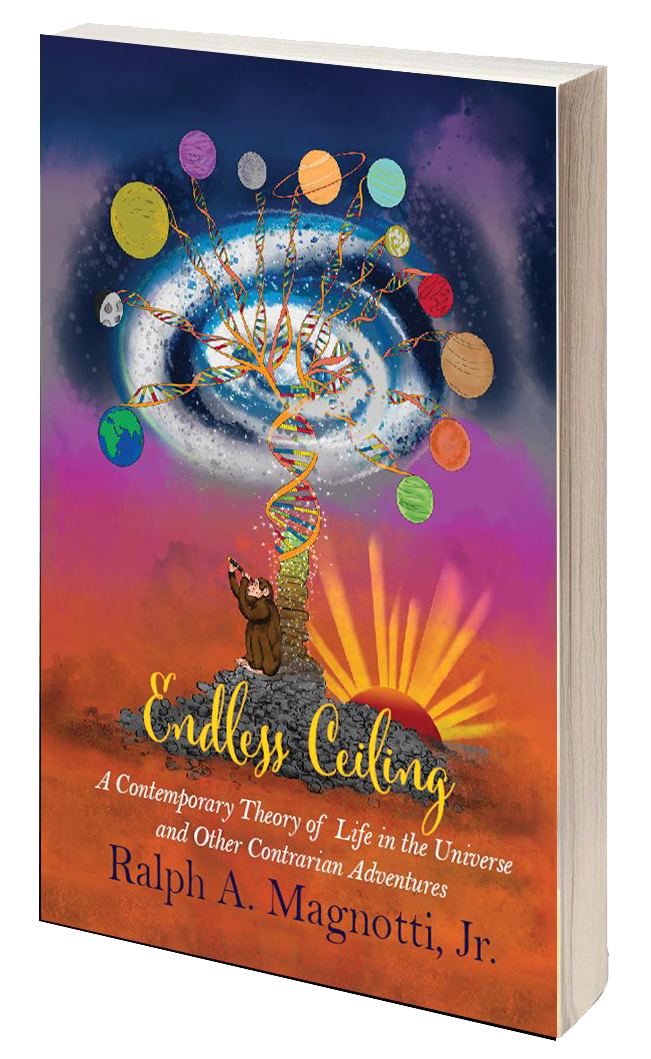 About the Author, Illustrator & Publisher 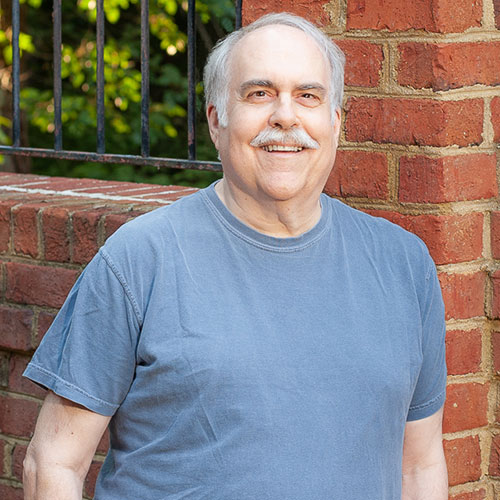 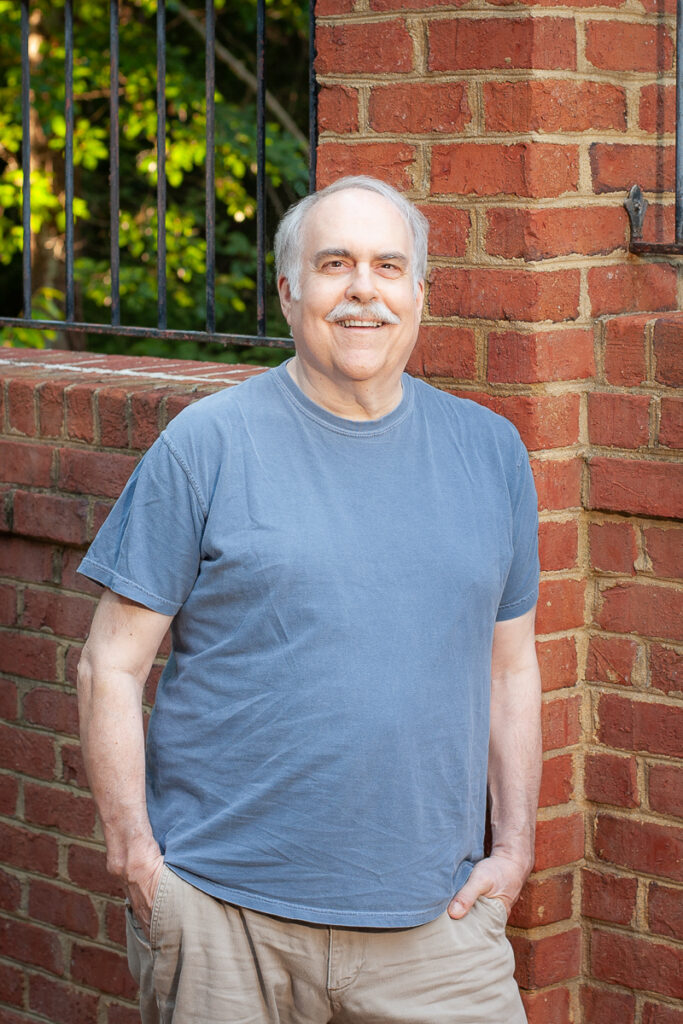 Ralph is a PhD biochemist board-certified in clinical chemistry, a teacher and an entrepreneur. He follows the Steelers, Patriots, random C-SPAN callers-in, the BBC News of the World on Public Radio and the Colbert Show on Late Night. Home is Williamsburg-VA, Pittsburgh-PA, Portland-ME and Cincinnati-OH, where he exists simultaneously in all four quantum States. 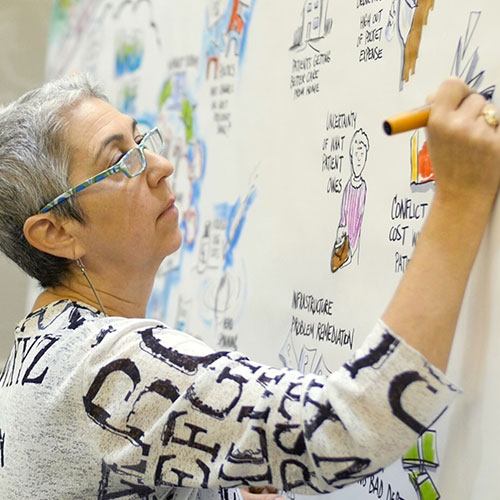 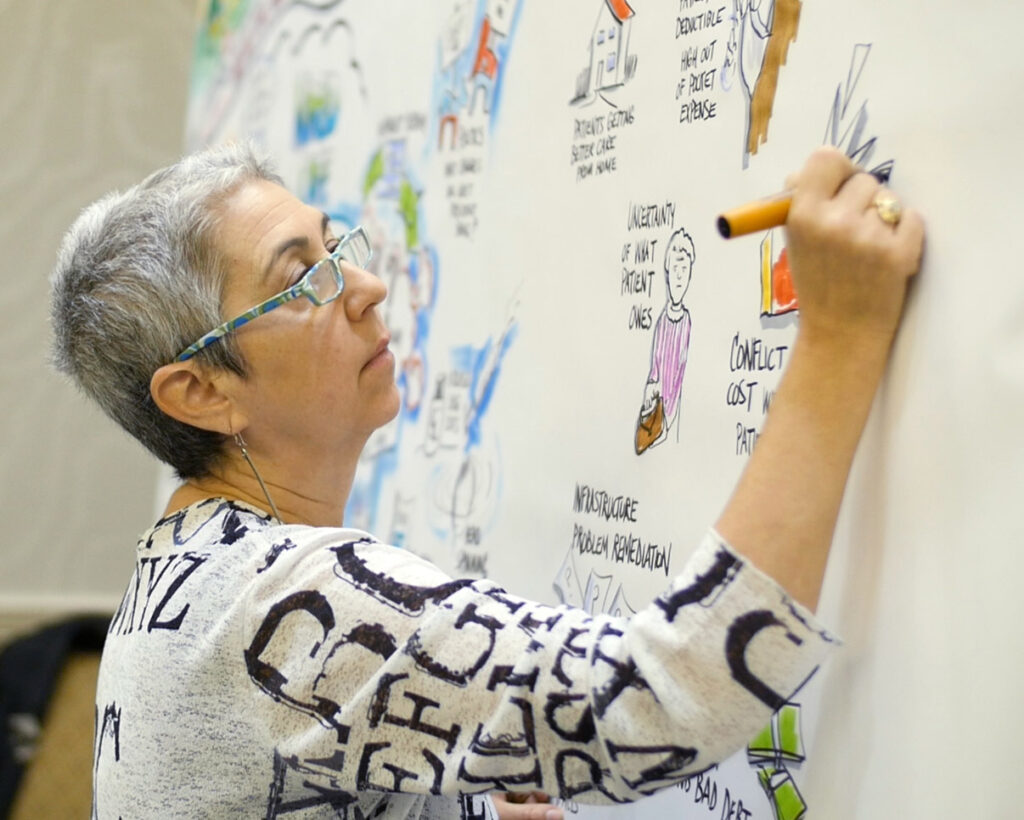 I enjoy doing illustrations and computer generated graphics. My passion however, is Graphic Recording, where I have the privilege of traveling around the world to visually capture meeting content on paper with markers and pastels. I support brainstorming and ideation sessions for major global corporations and non-profit organizations alike.

I have a BFA in painting from Carnegie Mellon University. For many years I bartended and waited tables while pursuing my artistic endeavors. During that time I did paste-up for ad agencies, was the art director for a local magazine, and created beaded jewelry and handpainted clothing which I sold in dozens of boutiques. I managed Moondogs, a great blues club for several years (those are my painted dogs on the walls!) when I decided to continue my education.

But before I managed to complete my Masters degree in media technology at Chatham University, I was lured into the corporate world where I was the designer and office coordinator for LaunchCyte, a biotech development company. Which leads me to where I am now... being able to work comfortably from home in my own studio doing Information Graphics and to travel extensively to visually document meetings and partner with specialists in services designed to improve the efficiency, energy, and productivity of conferences, meetings and collaborative design sessions. Examples of my graphic recording are on my portfolio page and can be downloaded as a PDF portfolio, which also includes some computer generated work samples. 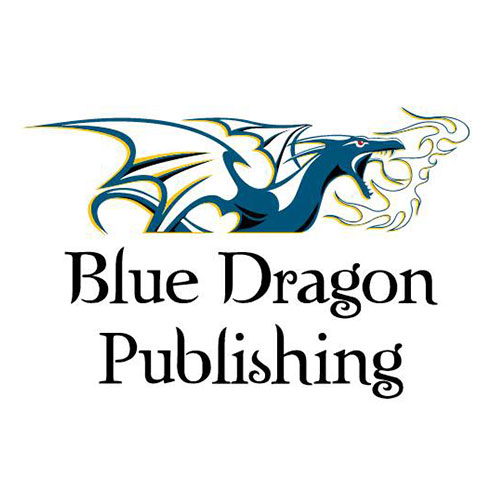 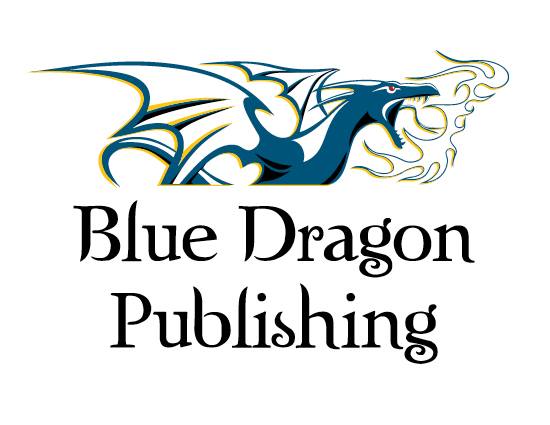 Blue Dragon Publishing, LLC evolved in the same way many independent publishers do. It started with a tenacious author with a unique story to share with the world. As a retired Air Force colonel, the founder, Dawn Brotherton, is experienced in making things happen. Rather than spinning her wheels trying to find a trustworthy agent, then waiting while the agent pitched multiple publishers, Dawn decided to forge ahead alone. Learning lessons the hard way with many false-steps, she eventually got into the rhythm of the publishing world. Other authors sought her advice and assistance. Thus, Blue Dragon was born. 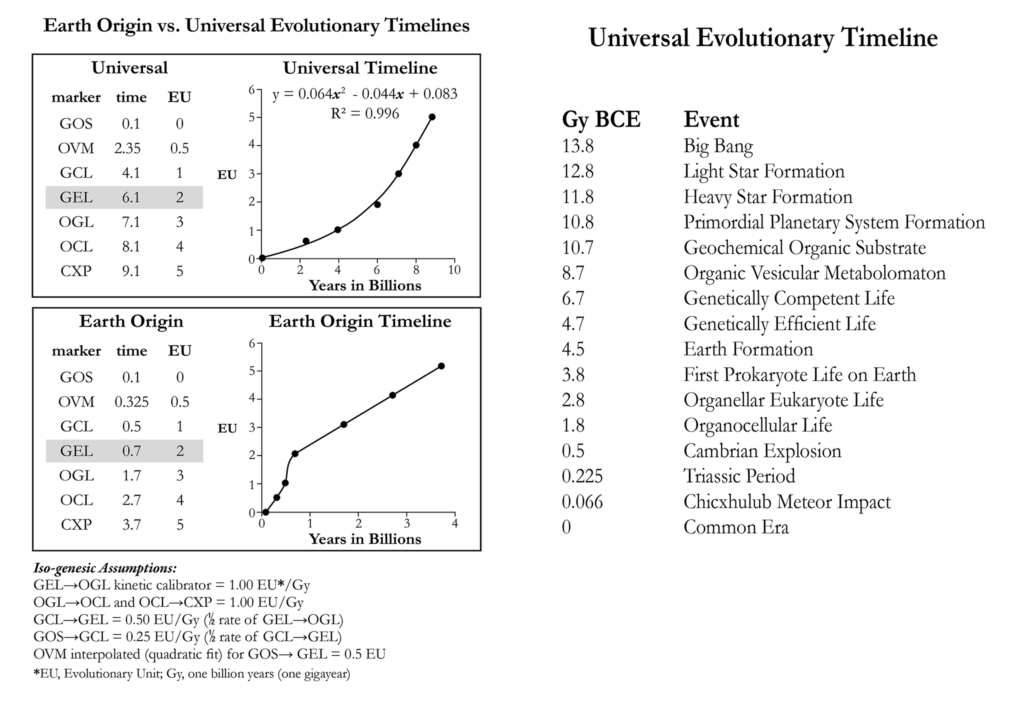 Iso-genesis and Astro-isogenesis. The Merriam-Webster and Free dictionaries cite a definition of isogenesis as referring to separate developments that originate from a single source, as various tissues are generated from an initial embryological locus. Related terms in this context are isogeny, isogenic and isogenetic. My use of it in an evolutionary sense is in the context of genesis, implying the adjective genesic. The definition in this context is a process of creation in separate predicate steps, in contradistinction to a process originating instantaneously. In this sense, the reified genesis of ideas and the Big Bang universe are opposite in timescale to the slow mechanistic iso-genesis of molecules and life. In the Epilogue, this is also used for a more specific definition in the case where the predicate steps are the same length of evolutionary progress (EU), although not necessarily the same length of time, depending on the rate of evolutionary mechanics that operates at each step. However, the overall process of early prokaryote biological radiations from a single starter planet to many different developer planets fits the classical definition of an isogenic process. The iso-genesic framework includes the implied isogenic step of impact transfer: GEL-starter to GEL-developer (LUCA). Thus, the iso-genesic framework of this book may also be defined as astro-isogenic, or astro-isogenesic. The scientific term astro-isogenesis should replace the old mythological “panspermia.”

Iso-genesic Evolutionary Framework. Evolution has been illustrated metaphorically as a growing bush that radiates numerous species horizontally around a common biomechanical development and vertically through incremental increase in biomechanical complexity. The iso-genesic framework is fundamentally vertical or hierarchogenetic. The iso-genesic scheme traces a through-line of chemical, genetic and biomechanical transition points projected forward and backward from the prokaryote- eukaryote transition calibrator. Going backwards to the Big Bang, the major transition divides between a purely geochemical evolution and a genetically efficient one that originated life on Earth. The transition from GCL to GEL is a hybrid of the two, and the OVM is a midway point of primarily geochemical evolution in between the GOS and GCL. The assignment of the transition speeds is analogous to the way speed is related to mechanical capability for locomotive devices, such as a bicycle, car, plane, and rocket. In the currently dominant “life after Earth” scenario, the problem is that the initial condition of geochemistry is lacking any genetic mechanism and must therefore be exponentially less efficient. Expecting abiogenesis to move faster than biogenesis is like expecting a bicycle to beat an airplane. One sees the same mechanically limited exponential cycle of evolutionary development in the crafting of tools in the pre-human primate line, in the development of electronics (Moore’s Law and Haitz’s Law), and in the application of enzyme-amplified ELISA in which the initial enzyme product is itself a catalyst. The mechanics of product formation are linear with time-squared rather than time as observed in the Epilogue to this book. Going forward in time, the transition points are primarily biomechanical, terminating in the CXP. If indeed the next evolutionary transition after the CXP is intelligence, the Chicxhulub meteor may have, in effect, doubled the acceleration of that development.

Iso-genesic Function. This started in 2011 with the a priori formulation of five predicate geochemical and biomechanical evolutionary transition points from GOS to CXP. For the next few years, I focused on the timeline from GOS to GEL. In early 2018, I realized all the examples of evolution I knew, followed exponential mathematics defined simply by an origin point and a time constant. With both in hand, perhaps a placeholder function could be applied to evolution. Using the prokaryote-eukaryote GEL→OGL transition as a kinetic calibrator to set the timescale of evolutionary events from the GOS to the OGL, I postulated exponential jumps between the two early pre-genetic transitions, assuming proportionality between genetic efficiency and evolutionary rate. The first iteration of the function using an assigned kinetic calibrator value of one billion years fit the transition points so well, while still fitting within an estimated 3 billion-year period of galactic development following the universal Big Bang origin point, that no further optimization was attempted. I judged any sacrifice in accuracy to be well worth the gain in mnemonic simplicity and understanding.

Evolutionary Unit. One can describe the random walk of a living species through an evolutionary space of historically contingent opportunities analogously to Fick’s random walk of molecules through the diffusive space of a liquid medium. A species millions of years later may bear little relation to its forebears, yet a through-line can be traced from one to the other. The hierarchogenetic distance of that through-line can be measured in evolutionary units. An evolutionary unit is an amount of hierarchogenetic change of a living species over time, connected by a through-line from an earlier incarnation to its future cousin.

Universal vs. Earth-Origin Graphical Comparison and Universal Evolutionary Timeline. The reader will note the length of time depicted on the universal graph is less than that of the universal evolutionary timeline on the next page. The origin of both graphs is at primordial planetary formation, with GOS at 0.1 Gy. The universal graph starts 3 billion years after the Big Bang and omits the discontinuity of impact transfer (apparently up to 0.9 Gy in the terrestrial case). Earth origin values beyond the GEL point are extrapolated from theory and thus less (4.2 Gy) than actual (4.5 Gy), whereas the values between GOS and GEL are interpolated between real values.

Sharov’s Genomic Clock. I first heard of this work in an April 25, 2019, online article by Tibi Puiu, in ZME Science, “Origin of Life Predates Earth.” The article reported a summary of a 2013 scientific paper by Alexei A. Sharov and Richard Gordon, “Life Before Earth,” ArXiv: 1304:3381v1. This was a more extended treatment of an earlier 2006 report by Sharov, “Genome Increase as a Clock for the Origin and Evolution of Life,” Biology Direct, Vol. 1, article 17. The material has also been presented in a book collection of articles from thirty-four authors, Habitability of the Universe before Earth (Sharov and Gordon, eds., Academic Press, Elsevier, Inc. ©2018), “Life before Earth,” pp. 265-287. In the preface to the book, “Life as a Cosmic Phenomenon,” the editors review the dominance of the assumption of “life after earth” by the scientific field from Darwin (1871) to Oparin (1936), Sidney Fox (1964) and many others more contemporary to this work (Klotz, 2012; Damer and Deamer, 2015). “Thus, challenging the dogma of the origin of life on Earth has been mostly considered nonscientific.” Richard Gordon had been receptive to a 2013 online presentation of Sharov’s genomic clock hypothesis, discounting objection of the dominant opposing view as “possibly just the last anthropocentrism.” Subsequently, Gordon presented a poster at a 2015 symposium on the origin of life sponsored by the Carnegie Institute in Washington, D.C., in which he invited people to contribute articles for a book. “Thus, it makes sense to reconsider the old premise that life originated on Earth and introduce a new vision of life as a cosmic phenomenon, which is presented in this book.”

Panspermia. Although interest in the possibility of life or its primordial molecules “seeding” Earth has clustered around the concept of “panspermia” since the musings of Anaxagoras of Clazomenae (500 – 428 BCE), it did not become seriously considered until the nineteenth century when the term was explicitly revived by the German physician Hermann Richter (Stephen Fleischfresser, “A Brief History of Panspermia,” in Cosmos Magazine, April 23, 2018). In 1871, the famed German physicist Helmholtz (mentioned previously herein) wondered, “. . . we may inquire whether life has ever originated at all, . . . whether its germs have not been transported from one world to another and developed themselves wherever they found a favourable soil.” The modern panspermia movement, however, is largely a cargo cult of anti-evolution acolytes, bending or fabricating evidence to suit a preconceived cosmology (“Authenticity of Bird Fossil is Challenged,” William J. Broad, New York Times, May 7, 1985; and Scientific American blogs, https://blogs.scientificamerican.com/tetrapod-zoology/alien-viruses-and-archaeopteryx-forgery/). Consequently, I have not used the term (except as a nexus word for literature searching) since panspermia is conceptually inaccurate, sexist and irrelevant. Genetically efficient autotrophic microbial life is far more than a mere “seed,” and its hypothetical transport between worlds, including its subsequent evolution, can be scientifically described as astro-isogenesis (See Notes, Chapter 22): colonizing events by geochemically evolved bacteria mediated by impact transfer during the natural history of the galaxy.

For media inquiries or to get in touch with Ralph A. Magnotti, Jr. please fill out the form below.